With Friends and TGIF

Like any other mid thirties and still single, I do have my share of pressure of all sorts from all sides. In this stage of life, when responsibilities and commitments look more like final paper, I and a few to-be-expired bachelors have come up with Thank God Its Friday [TGIF]. Boozing, singing, banging et cetera is all part of TGIF, and we are beginning to learn the ropes marking the work week has officially ended. A lesson from the West. Enjoyment of drinking matters, nothing else, not even sex.

In the weekdays, these selected friends are immersed in work, thoroughly occupied and nothing matters, a commitment they made to these present day booming MNCs. Though my working days are from Monday to Saturday, and sometimes Sunday, I have to sacrifice Friday and Saturday night for them. Of course I have to, because there is a thin line between loneliness and happiness at this stage of life, and I am sure I won’t prefer the loneliness side. I may sound desperate, but true, I admit.
Above all these pressures, another pressure is of the season – summer. Yesterday, it was 43 at mercury, imagine about the night. After day’s work, I feel like I lost all the minerals and liquids in the body. Sit for some minutes, unable to decide whether to skip the jogging session for the evening or just ease the stress with a nap. Then I realize its TGIF tomorrow, I won’t have a control on my appetite, besides I have to maintain my ego – no first user of excuse for “No More Drinks” like “No First Use of Nuclear Weapons Policy of Govt. of India”. At this age, loosing weight is difficult, but living fit is important, so I must run to go closer to get my ideal goal weight, rather than succumb to crash diets for it. And yes, beating the dull caused by the heat of 43 degree Celsius, I completed my goal of running 6 km without interruption. Now I won’t mind waking up with a puffy face, inflated tummy on Sunday morning after much enjoyment with friends on Friday and Saturday nights. It’s not all about wine and meats, truly, but also about maintaining my social circles outside social networking like Facebook, Twitter and e-mails. These days, many of us finish up chatting and liking at social networking sites, and hardly getting time for eachother even to wish.

In the night, when I was reading the final proof of a book written by Rajiv Kshetri, JNU, my attention was caught in the following lines… “in the early 90s, the government of Manipur declared the state as a DRY state leading to a complete shift in the nature of alcoholism in a different turn...it is true in one sense that over-consumption of alcohol could have a negative impact in the growth of society...however, the way it has been prohibited over the years has resulted for a large section of youth to use other forms of drugs as an alternative to alcohol…”. [Kakching-The Community]

I agree with the author to a great extent. In some states, say Gujarat, Manipur, Mizoram [Manufacture, sale and consumption of wine from guavas and grapes permitted but wine cannot be transported out of the state], Nagaland [Since 1989, sale and consumption illegal], and the union territory of Lakshadweep, consumption of alcohol is prohibited. But none of the states has this problem of youths using other forms of drugs like tablet etc happening in Manipur. Sometimes, “spare the rod spoil the child” principle doesn’t work. This, you can witnessed at any of the popular night clubs in Delhi [or in any metro], with increasing number of youths of our state. Suddenly, too much freedom without restraining from anyone, and no moral policing, its obvious of going out of control.

One good thing about Delhi is it has plenty of parks. The city must have the distinction of being one with the maximum number of jogging parks, next to Pune. Running or jogging for atleast 30 minutes in a park will easily burn out all the extra calories I have accumulated all these while. Instead I choose gym and wasted one hour, and in return, I have lots of appetite. Huh! Dreams of 6 packs – a distant dream.

It must be around 7.30pm-my gym time, one of friend ask me to accompany her upto a shopping mall nearby. She was asked by her landlord to pay their monthly rent there in the shopping mall gate. When I asked, why didn’t he turn up by himself at your room and collect the rent because he knows his tenants are ladies? She explained something which I didn’t agree. While returning back, we were stop by a police officer in uniform. Without any connection he asked, “do you know me?” I said yes, and in brief, I explained how I know him. After a brief conversation, he politely, in a very concerned tone, requested us to attend meetings conducted by Delhi Police for the safety of North East People. His last line was “If anybody teases you, or abuses you, or any autorikshaw driver who refuse to go at your desire destination, please call me at my number.” But he didn’t give his number, and I didn’t feel the need to ask, as I already have the mobile number of the police inspector in charge of my locality.

I always show this police officer in a motorbike roaming here and there in my locality. Several times, I show him yelling at vegetable vendors at roadside, or those motorbikers without helmet or 3 sitters. Atleast thrice a day, we met though we didn’t exchange words or greetings. But he never mentioned anything about such a special meeting of north east people in an around of my locality. Yes, I remember a meeting of such in 2010, but after that I never attend or hear of any such meeting. I ask myself, why all of a sudden, that too when I am with a lady from north east! Are they really concerned about North East people?

It must be around 10.30pm, after having dinner, one of my friends suggested about going for a movie. All six of us went to PVR Anupam for an 11.25pm show. I can’t remember when did I get the chance to go out for a last show movie at Imphal! The crowd was good. Most interesting was the number of female moviegoers even at that hour. Most of them were at strings and shorts, nobody cares. Of course mercury was soaring these days. Who says only North east girls wear shorts and strings or say western outfits?

It must be around 2.30am when the movie ended. While returning, I saw two police officers, with no guns, only truncheon/baton [as a symbol of authority], were checking every vehicle entering our locality. I was surprised, this checking happens only when there is something wrong in the city, or in the month of August before 15 or in January before 26. I checked internet instantly, but nothing as such reported in any of the web pages. When our turn comes, they didn’t ask anything, just let us go. One of my friend jokingly said, they let us go without any words because we are mongoloid or North East people.

Are we already marginalized group again marginalizing in this city? Or just that we are peace loving people, so they don’t feel any danger from us? If the answer is yes for the second one, then why is there ASFPA in Manipur? May be they are charged up from the instant report of increasing crime rates in Delhi. Or may be the death of Richard Loitam in Bangalore, and the suicide of Dana Sangma in Noida make them feel insecure of detaining north east people at roadside. Whatever, but why waiting for something wrong to happen to charge up? Why not taking precaution beforehand and alert all the times?
Posted by Unknown at Sunday, May 27, 2012 No comments: 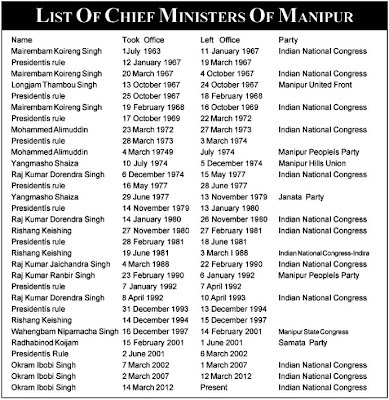 Posted by Unknown at Saturday, March 17, 2012 No comments: Links to this post