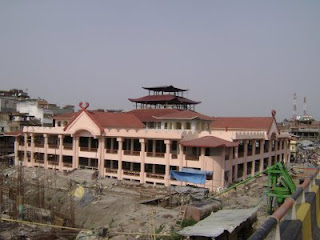 A small city in a small state, but still due to lack of proper administration, everything got messed up. A flyover with old-odd model has come up after much delay, making traffic flow some relieve in this Ima Keithel vicinity. Good atleast.

Ima Keithel, carefully crafted by the industrious spirit of Manipuri women represents Manipuri womens' identity. More than seven thousand ima stalls earn their livelihood from this market which is said to have founded by Khagemba Maharaj of Manipur in the late 16th century.

Now three new keithels [market complex] are in the pipeline to inaugurate, Khwairamband, Lakshmi and New Markets; where a municipal fee of Rs. 1.70 lakh has to be paid for acquiring a 4x4ft stall. Good for all of us, specially our keithel ima[s]. It's here in the Ima Keithel that our men consecrated their devotion and life to the women of the state. Among the three complex, two of them has already completed, but still waiting for the last one to inaugurate together. Can't understand the logic behind for such a long delay in throwing the market complex to the public!
Posted by Unknown at Wednesday, May 06, 2009 No comments: Links to this post