“We feel happy that the ADC election has been conducted. However, the election was postponed for more than 20 years because of our demand for the Sixth Schedule. As for Kuki brethren, we welcome the election, but Nagas opposed it.” -- Sheikhomang Chongloi, a voter

“In 2010, the State government took the decision to conduct ADC election and consequently they are holding this election. We hope that this time the District Council will be fully operative and I believe the public residing at the hills will be benefited up to some extent” -- Paolun, voter.

The Government of India placed Manipur under the Fifth Schedule on the basis of the A.V. Thakkar Subcommittee’s report. The Government of Manipur passed two acts: the Manipur Land Reform and Land Revenue Act (MLR and LRA), 1960 and the Manipur (Hill Areas) District Councils Act, (MHADCA) 1971. The MLR and LRA is meant for all the districts of Manipur. The District Councils started functioning from 1973 till 1989; and since then it has been kept in abeyance for the demand for extension of the Sixth Schedule provision in the hill areas of Manipur till May-June, 2010.

The Manipur State Legislative Assembly passed the Manipur Hill Areas (Acquisition of Chiefs Rights) Act on 14 June, 1967 which authorized the state government to acquire the rights, titles and interests of the chiefs in the hill areas of Manipur. According to the Act, the chiefs were to be compensated on the basis of the following criteria: (1) the area of land under chiefs; (2) total number of households within each chiefdom; and, (3) compensation in installment or lump sum.

To encourage people’s participation in the local administration, the Manipur (Village Authority in Hill Areas) Act was passed in 1956 which introduced for the first time election of members to the village authority on the basis of adult franchise by repealing the earlier MSHPAR Act, 1947. When Manipur attained statehood in 1972, the Manipur (Hill Areas) District Council Act, 1972 was passed by the state government.

"The Manipur Assembly  passed the Manipur (Hill Areas) District Councils (Third Amendment) Act, 2008 only after the HAC consented to it following a six-month study of the provisions. "If the tribal population of Manipur did not like the bill, no tribal MLA would have had to courage to clear it in the HAC. The clearance by the HAC shows the Act has the support of the tribal people of Manipur," --Biren
Posted by Unknown at Tuesday, May 25, 2010 No comments: Links to this post

Email ThisBlogThis!Share to TwitterShare to FacebookShare to Pinterest
Labels: Politico

"As of now, the Imphal-Dimapur highway does not figure in chief minister Ibobi Singh’s scheme of things. The Manipur government dropped plans to use the supply route after the state director-general of police Yumnam Joykumar Singh was asked by his Nagaland counterpart not to send the trucks till the situation became normal."
--www.telegraphindia.com

"Surely the image of Ibobi Singh has gone up manifold and he has become the darling of the people for the simple reason that he defied the diktat of the central government over Muivah's visit to Manipur."
--Babloo Loitongbam

"The naga brothers and sisters should wake up before it is too late and stop those leaders who are using them as a human shied for his political game. Question is how many naga people freely follow the ideology of Muviah and his dream to form a state called as "Nagalim". Should not it better to call "Muviah-lim" instead of calling "Nagalim"."
--chaobaphuritshabam.blogspot.com

"The sky is empty and free, if they dream so high for making a land inhibited by only one community then it should only be in the sky...not on the mother earth..."
--chaobaphuritshabam.blogspot.com

"Even Ukhrul district, viewed as overwhelmingly inhabited by one Naga tribe, the Tangkhul, now has a significant presence of other people, in particular the Kuki. In Senapati district, supposedly inhabited overwhelmingly by the Mao Naga, Kuki people dominate the Sadar sub-division. They also have many political demands for ‘recognition', assertion of territoriality and demarcation of an exclusive political space. Much the same points may be made in respect of Tamenglong and Chandel districts. A further complexity of switching of tribal identities is a marked feature of the identity politics, which is especially marked in Chandel district."
--M. S. Prabhakara, The Hindu

"It is where Isak Chishi Swu needs to be asked, whether is it Meiteis or Swu and his outfit who are greedy of other people's land? The Meiteis or for that matter, the Government of Manipur have never encroached upon the territory of Nagaland or Mizoram or Assam or even Myanmar."
--N. Hera, Hueiyen News Service

"Even looking back at the recent history, after Manipur became a full-fledged state, the first Chief Minister was Late Md Alimuddin from the minority community. In its 37 years after getting statehood, Yangmasho Shaiza and Rishang Keishing ruled Manipur as Chief Minister for 21 years."
--N. Hera, Hueiyen News Service

"We want that the Meteis of Manipur and the Nagas cohabit without any animosity."
--Kughalo Mulatonu

"If today’s generation could not protect the territory of the state drawn by the blood of 'our forefather' who fought even with the mighty British Emperor, it will be meaningless for the Manipuris to live in this world. When they could not convinced rebel leader Muivah to install as Chief Minister of Nagaland to end his arm struggle, leaders of the GoI, on thinking that if he be installed as Chief Minister by creating South Nagaland, is sending Muivah to the state."
--Yumnamcha Dilip, president of the UCM

"If a small road was blocked for day in Haryana or Uttar Pradesh, the media would have covered it immediately. But a month's blockade of two arteries joining the state with the rest of India hasn't attracted even a fraction of that attention. Why? Because Haryana and UP are more important to South and North Block than Manipur?"

Email ThisBlogThis!Share to TwitterShare to FacebookShare to Pinterest
Labels: Quotes 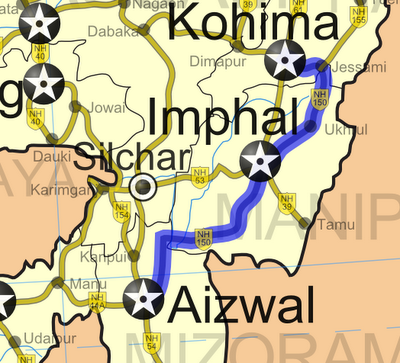 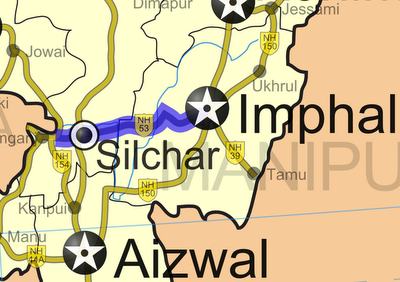 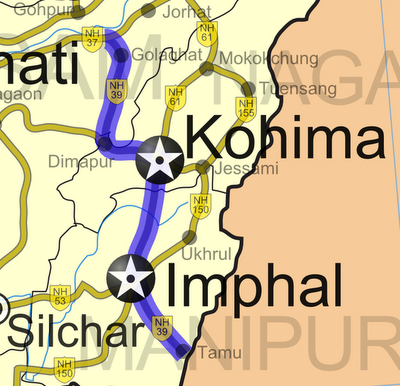 Posted by Unknown at Saturday, May 15, 2010 No comments: Links to this post

Email ThisBlogThis!Share to TwitterShare to FacebookShare to Pinterest
Labels: Tribes

Email ThisBlogThis!Share to TwitterShare to FacebookShare to Pinterest
Labels: History

Email ThisBlogThis!Share to TwitterShare to FacebookShare to Pinterest
Labels: History of Manipur

Email ThisBlogThis!Share to TwitterShare to FacebookShare to Pinterest
Labels: Railway Map of Manipur

Who is Thuingaleng Muivah?
He doesn't need an introduction; at least for the North East people. He was successful in making a niche in the world of law breaker. Now he is trying very hard to become a lawful citizen. Its very good move. But why at the cost of Manipur's territorial integrity?

Thuingaleng Muivah is wanted and with more than 1 lakh as cash prize on his head from the state Government for several cases of murder and mayhem like  the 1992-1993 ethnic cleansing of Kuki tribes in Manipur, in the state is still valid. It is said that the ethnic cleansing uprooted 350 Kuki villages, claimed more than 900 lives and 100,000 Kukis turned into refugees.

Under Indian Constitution, Article 19 (1)D, everyone has the right to live and move anywhere in India. But there is also a clause mentioned in the Article 19 [Article 19 (5)] that if the individual movement leads to a law and order problem, his movement can be restricted as per law.

Chief Minister O. Ibobi, on finding that the Union home ministry is proposing to send him under Z-plus security cover in a government helicopter to the state, refused to oblige the centre's order to let Thuingaleng Muivah in at the meeting called by Home Minister, P Chidambaram, Finance Minister Pranab Mukherjee and Defence Minister AK Antony...it is indeed, a bold act. None of the previous CMs nor the future CMs would dare to take that stand at the interest of the people of the state in large.

The capricious decision of Government of India, with an equally dominant and arrogant diktat of forcing compliance from the Ibobi government followed, there rise automatically a lot of questions in the mind of many Manipuris. It is need of the hour for all the Manipuris to stand united for our territorial integrity and peaceful co-existence.
Posted by Unknown at Sunday, May 09, 2010 No comments: Links to this post

Action speaks louder than words. There are certain things which are not controllable. What will you do if someone cornered you after knowing your weak point? Weak point is something which need utmost care. It may brings you down from your position, or it may help you in reaching your dream goal.
Before sharing your petite feeling to someone you trusted most, examine yourself twice or thrice...make sure that he or she had also shared their secrets to you. Otherwise accept your defeat to him/her someday.
Winning is beautiful, everybody wants to win; but to win, learn to lose. See his/her reaction when you are in loss...accordingly make your decision. Remember that your correct decision will make your mission of life possible.
Posted by Unknown at Wednesday, May 05, 2010 No comments: Links to this post

After so many years, months and days of silence in our friendship, he call me up on a lethargic Sunday morning. Unexpected it was...really. Talked for a while, topic ranging from Ibobi's govt. to rising mercury in Delhi to ash in Iceland. Incoming has no bill so I attended without bothering his bill.
But nothing comes in free nowadays...he was talking endlessly because there was someone to pay his mobile bill...for a while I forgot his nature...talking after so many years that's why!!! A genuine rival is better than a factitious friend...a lesson after the mobile talk.
After a lengthy diversion, he took a U turn and asked me about my feelings towards my ex-love. After opening the closed clogging, all of my discontentment and condemnation flush out...loose self control... till the call was off. He recorded our talk using his latest mobile, equipped with latest technology...and presented to my ex-love.
Even my enemy cannot do this. I make up my mind...I spoke only the truth and "the truth" doesn't need to remember or memorize...
I have no baggage for my past, am quite happy with my present ...why should I bother about the nightmare again and again!...the bottom line mantra yielded: NO LOOKING BACK...!
Posted by Unknown at Wednesday, May 05, 2010 No comments: Links to this post